The Land of Endurance™

The IRONMAN 70.3 World Championship Course covers 70.3 miles of spectacular desert terrain, two billion years in the making. The course showcases some of the most iconic landscapes in Greater Zion. The experience here will expose athletes to an environment of extremes. In a land sculpted by persistence and determination, proven champions will navigate a path through two iconic state parks, five enthusiastic communities, and a fragile desert reserve as they rise to conquer one of the most prestigious and striking events in the world. Welcome to the Land of Endurance.

Plunge Into a Desert Oasis

Sand Hollow Reservoir in Hurricane, Utah is one of most unique and scenic swim venues on the IRONMAN circuit. Athletes start and finish the swim from the main boat ramp at Sand Hollow State Park. The crystal blue waters make ideal swim conditions for athletes. Sunrises here can be indescribable, and the desert scenery is unlike anywhere in the world. Spectators can line the transition area and the shoreline to watch the athletes enter and exit the water. Athletes will have a fast two-turn course to navigate their 1.2 mile swim. Athletes run from the ramp to where their bikes are mounted in a fenced transition area (T1) toward the north end of the parking lot, then walk their bike to the starting shoot before mounting for the bike course.

Ride Through Sand, Lava and Stone

Athletes transition from the Swim to the Bike and begin the 56-mile ride in the parking lot of Sand Hollow State Park. Spectators can line the transition area and the beginning section of the bike course from the reservoir to the Park entrance station. As they exit the park, athletes make a left turn onto Sand Hollow Road, then turn left onto a brand new section of the Southern Parkway (State Route 7) which cuts through a mile-long stretch of brilliant orange sand dunes as it heads toward Hurricane City.

The first climb starts about three miles into the bike course as the road rises away from the dunes. This 1.5-mile steep grade peaks at a summit with a brilliant view of the reservoir and sand dunes in the background and the Hurricane Cliffs ahead to the east 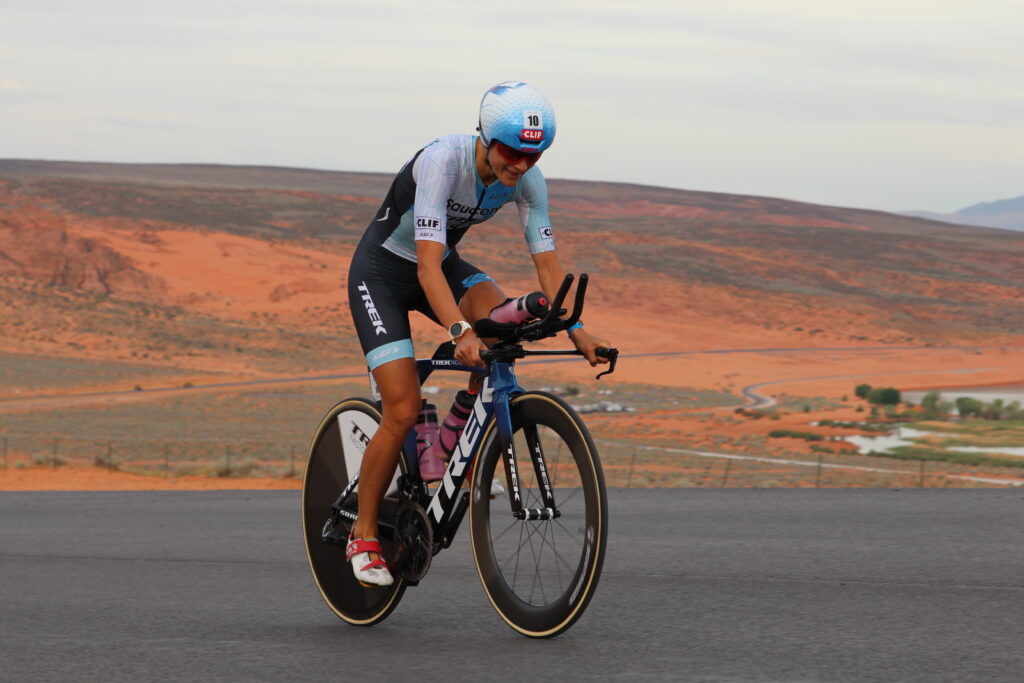 About 6.5 miles in, the course turns right onto 3000 South for a short out-and-back (two miles each way) toward the Hurricane Cliffs. The turnaround at 1100 West in Hurricane is a great spectator location for those coming from Hurricane City on the East side of the course. 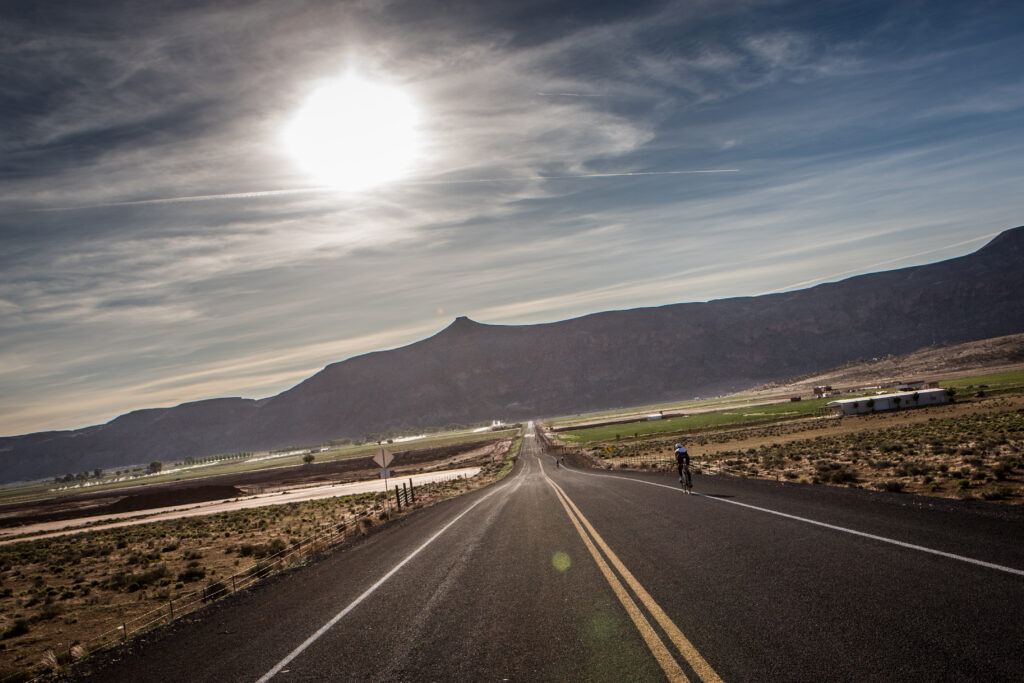 After the turnaround, cyclists head back to the Southern Parkway and head North toward State Route 9. This new stretch of highway provides beautiful 360-degree views showcasing the contrasting southwest terrain including Pine Valley Mountain, the Hurricane Cinder Knoll, and Zion National Park on the horizon. At the north end of the Southern Parkway, athletes turn left onto State Route 9 (SR9). This major highway connects Hurricane to Interstate-15, Washington City, St. George, and other communities on the west, and Zion National Park to the east. Motorists are encouraged to avoid SR9 during the race on September 17 and 18 from 7:00 am to Noon. Cyclists will ride west on SR9 for 5.5 miles before turning left onto Telegraph Street in Washington City.  The SR9 section features a slight downhill for four miles before another steep one-mile climb up and over the Hurricane Fault, just past Quail Creek Reservoir.

Approximately 18 miles into the course, cyclists turn left from SR9 onto Telegraph Street in Washington, Utah. Telegraph Street was originally the route of a telegraph line used for communication in the late 1800s. It now serves as the main thoroughfare through the Washington City. Telegraph runs along the spine of the Hurricane Fault with a short, steep climb to the top of Coral Canyon and a fast downhill into the heart of the community. There are no designated viewing locations on this section, but spectators in the area can gather near Razor Ridge Park, or near one of the entrances to Coral Canyon neighborhoods.

At approximately 22 miles into the race, athletes turn right onto a slow, sustained climb at Washington Parkway. This hill is a bit deceiving, especially as it steepens near the overpass at I-15. Just past I-15 the course turns left for the second out-and-back stretch (two miles each way) which takes them down Buena Vista Boulevard, turning left onto Main Street and directly into the center of town, where they will turn around and head back to the Parkway. The turnaround at Main Street and 100 North in Washington is an ideal spectator location. It is right next to Veterans Park and the City Offices where Washington City officials are hosting a celebration event. Access is available from Telegraph Street east of Washington Parkway and there is ample parking nearby. Once onto Red Hills Parkway, athletes enter St. George City, the largest community in Greater Zion. The course take cyclists to the top of the red bluff overlooking the city. Red Hills Parkway skirts along the edge of the Red Cliffs Desert Reserve, passing Pioneer Park and the Dixie Rock. This section of the road will also feature an extended portion of the run course. During the race it is accessible only by foot via 200 East/Skyline Drive, or from 900 East, but it is an ideal viewing location for pedestrians who don’t mind walking up to the area. Red Hills Parkway from 900 East to Bluff Street will be completely closed for vehicle traffic during the race. The scenery changes again at mile 37. Red Hills Parkway becomes Snow Canyon Parkway, a beautiful stretch of road leading to the iconic Red Mountain in Ivins. The street is lined by beautiful homes and vegetation nestled between ragged sandstone cliffs and an ancient basalt lava field akin to the iconic lava fields of Kona, Hawaii. Informal viewing locations for nearby residents can be found along the Parkway. At mile 41, the course turns right onto Snow Canyon Drive to take athletes up the signature climb on the course. The stunning four-mile climb through Snow Canyon State Park features nearly 1100-feet of elevation gain. The road takes cyclists beneath dramatic red and white Navajo sandstone cliffs towering ominously between menacing black ridges of ragged basalt. The extreme terrain of Snow Canyon was formed by terrible convulsions in a former age. The grueling climb with its striking backdrop is an endurance photographers dream location. It may be the most photographed section of a bike course in the IRONMAN world. Spectator access in Snow Canyon is possible on race day, but only available from the bottom or top of the canyon by foot. Snow Canyon was named after Erastus and Lorenzo Snow, two early pioneer leaders in the area. It is the backdrop of several early western movies including Butch Cassidy and the Sundance Kid, The Electric Horseman and some early John Wayne films.

After the intense climb up Snow Canyon, cyclists get to stretch their legs out on a steep decent back to town. One former Olympic Medalist said she had two first-time experiences when testing out this course. She had never gone slower on a bike than her first time up Snow Canyon, and she had never gone faster on a bike than racing back to town on SR18. The steep and mostly straight downhill section can be a game changer for strong cyclists who never let up during the downhill section. The cyclists on SR18 use the flyover to cross above cyclists on Red Hills Parkway before continuing down Bluff Street to Diagonal Street. Run Among Towers of Stone At roughly 2.5 miles, runners turn right onto Red Hills Parkway where the climb gets even steeper. This desolate three-mile stretch cuts along the edge of the Red Cliffs Desert Reserve with few signs of civilization before surfacing at the top of the bluff for a welcome view of down town St. George. Spectator access points are limited here making this a lonely and grueling stretch that truly tests an athlete’s mental and physical capacity. Above the City, St. George

At the top of Red Hills Parkway runners do a short out-and-back that gives them a chance to take in the city views and hear the excitement of the cheering crowds in the city below, but more importantly, they can assess the competition. Red Hills Parkway skirts along the edge of Pioneer Park and the Dixie Rock making it an ideal location for spectators to spend some time during the run. In this area, spectators can see the runners pass four times before they head down Skyline Drive toward the finish line. During the race, Red Hills Parkway is accessible only by foot via 200 East/Skyline Drive, or from 900 East. The Parkway from 900 East to Bluff Street will be completely closed for vehicle traffic during the race.

At 5.8 miles on the first loop (12.1 on the second), runners turn onto Skyline Drive for a steep descent that drops nearly 100 feet in just two blocks. The decent to town continues along 400 North to Main Street where the grade steepens again as it heads toward the roundabout on Tabernacle and Main. Runners on loop one will circle the M-Dot sculpture to head back out on the second half. Second loop runners will continue past the M-Dot sculpture to the Finish Line between Tabernacle and 100 South.