When Jamaica Hansen’s son Michael reached his senior year at Desert Hills High School, he asked his mom to run the St. George Marathon with him. Hansen, a former gymnast and lifelong athlete, didn’t hesitate to comply. Daughter Haleigh’s 2019 senior year request was that Mom put together a multigenerational IRONMAN 70.3 relay team, with Jamaica swimming, Grandpa David Frahm of Worland, Wyoming doing the cycling, and Haleigh completing the run. Once again, Hansen made her offspring’s wish come true.

Given that Hansen has led the volunteer team that oversees the Finish Line at IRONMAN St. George for the past 12 years, it was a perfect way to celebrate her children’s graduations. But the experience – of having to accept the assistance of others – was a decidedly different one for someone who’s always on the “giving” end at IRONMAN, and at the other races she puts on throughout the year as co-director of Red Mountain Running (presenters of the Baker’s Dozen, Hog & Jog, Southern Utah Half Marathon, and other popular events). At the beginning of her volunteer career with the annual triathlon, Hansen was put in charge of the “catchers,” those kind souls who stand on either side of the finisher chute, ready to catch sick, injured, cramping or otherwise impaired athletes once they cross the Finish Line, and provide any needed assistance. Once the IRONMAN transitioned to a 70.3 in St. George, Hansen was given oversight of the entire finishers’ area, including medals, coordination with athletes’ family members, and much more.

Despite the scope of Hansen’s responsibilities, she rarely lacks for eager helpers. “Honestly, it’s never difficult to recruit volunteers because the Finish Line is the place to be,” she says, excitedly. “We’ve seen people get engaged at the Finish Line and all kinds of fun stuff. And it’s always wonderful to see athletes reunite with their families. As a catcher, when you ask an athlete how their race was, they’ll usually tell you an amazing story. Sometimes it makes it hard to keep everyone moving through!”

One of Hansen’s most important tasks is ensuring that “DNF” (did not finish) athletes are tracked, their timing chips returned, and their status is transmitted to the timing staff. During the IRONMAN 70.3 North American Championships in May of this year, a somewhat dejected-looking athlete advised Hansen that he would be a DNF. Seeing the sling he was sporting, she inquired about his injury. He shared the sad news that he’d had a bad accident while out on a training ride the day before the race, sustaining severe injuries to his shoulder.

Says Hansen, “I said ‘you’re here; would you like to volunteer at the Finish Line?’ He said ‘Really, could I do that?’ I told him he could … and then I had to help him put his volunteer shirt on, and I saw that he had complete road-rash on his back. But he stood there and handed out water and medals with us all day. Later, he tagged me on Instagram, and said that being on the other side of the Finish Line was an awesome experience, one that he wasn’t expecting, citing the volunteers as IRONMAN who make the Anything Is Possible (IRONMAN’s motto) happen. “He was so incredible; he was willing to do whatever small thing he could do for the greater good.”

Such inspirational stories crowd Hansen’s memory banks. Her favorite occurred in 2012, when (having been designated Team Captain of the Year by the IRONMAN organization,) she was given the opportunity to travel to another IRONMAN competition and observe. She opted for IRONMAN Texas, where she and her husband worked an aid station, then headed over to the VIP area at day’s end.

There, they spied a steadily growing group of people wearing identical shirts around the Finish Line, obviously all supporting an IRONMAN athlete yet to finish. As the hours wore on, the throng expanded. By nightfall, there were hundreds of them. Then, as their excitement reached a crescendo, a wheelchair-bound man from their group was pushed to the Finish Line. They all watched as their athlete (who had run for his disabled friend, who suffered from ALS) completed the race, to deafening applause and cheers.

After the athlete received his medal, Hansen sprinted to the medals rack and grabbed an extra, giving it to the exhausted, but euphoric, new IRONMAN. “I told him ‘You go medal your friend. He deserves this too!’” Hansen remembers, her voice growing husky. “It was really heartwarming to see that happen. It’s so important to create those memories that people can keep.”

As the Greater Zion community prepares to welcome thousands of the world’s top triathletes to town in September, Hansen hopes every local resident will help create such memories in some way. There are still abundant IRONMAN 70.3 World Championships volunteer opportunities available; interested parties need only visit IRONMAN.GreaterZion.com/community/volunteer to sign up.

“Sure, some jobs are maybe less glamorous,” says Hansen, “but it’s always exciting to be a part of it all, and you can make your job fun. Bring a friend, bring a chair, wear a fun costume; do whatever you can to bring that athlete a little joy, for even just a few seconds when he or she goes by.

“If you’re an athlete, come out and appreciate what’s needed behind the scenes to make your events happen,” Hansen finishes. Then, laughing, she adds, “And as the saying goes, ‘if you’re not an athlete, be an athletic supporter.’” 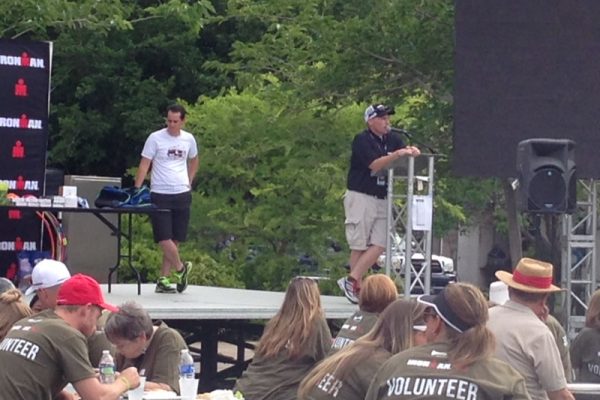 By the time IRONMAN 70.3 competitors arrive at Aid Station 5 on the run portion of the competition, they’re usually hot, sunburned, and exhausted (or, in some years, frozen, rain-soaked, and exhausted)....
Continue Reading