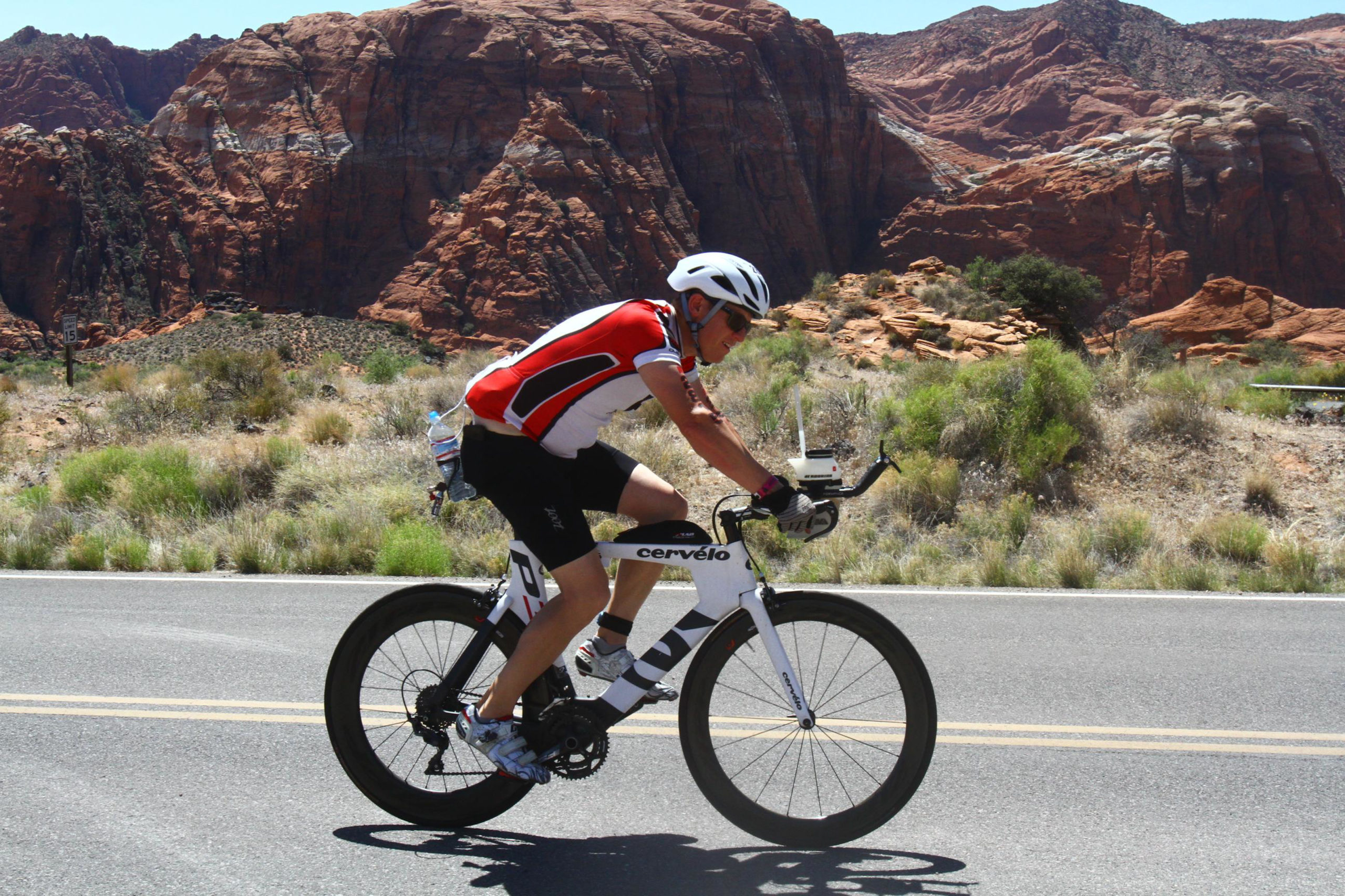 From the first IRONMAN event in St. George through the recent World Championships, local city engineer thrives in the legendary competition

Like many IRONMAN competitors, Arthur LeBaron reached a point during the 2021 World Championships when he wondered whether he’d make it over the finish line. But he never questioned why he’d ever attempted the grueling contest in the first place.

Arthur, a native of Hurricane, where he works as a city engineer, has been an athlete since his youth. In the months leading up to the May event in St. George, he had trained as well as possible, and felt confident when the starting gun went off. He’d easily made it through the 2.4-mile swim, and had conquered the 112-mile bike course, despite steadily rising temperatures and winds. As he began the third leg of the event – the full marathon run of 26.2 miles – his spirits were still relatively high.

But just 10 miles onto the run course, Arthur found himself hunched miserably by the side of the road, his body seemingly ejecting every meal he’d consumed in the prior six weeks. Indeed, for the first 20 miles of the marathon, he was unable to keep any sort of nutrient or fluid down.

Spotting his malaise, members of the IRONMAN team sprinted to his sides to offer support. Did Arthur wish to be taken to the medical tent and end his race, they asked? He says he gave the suggestion serious consideration – for roughly a minute.

“That run just broke me,” Arthur recalls ruefully. “As Mike Tyson once said, ‘everyone has a plan until they get punched in the mouth.’ Being on my hands and knees, puking on the road, was just not what I ever thought was going to happen. But IRONMAN has this cool mantra, that ‘anything is possible,’ and they acknowledge that miracles happen in people’s lives. I believe there’s no other explanation for what happened to me. It was truly a miracle that I was able to get going again, and finally stumble across the finish line.”

Arthur is the first to acknowledge that he is not a member of the elite category of IRONMAN athletes. His job – which sees him interacting daily with land developers, offering support for new city infrastructure projects, and much more – consumes a significant amount of time. In his remaining free hours, Arthur and his wife Andrea are parents to seven children, ranging in ages from 7 to 25. He credits his spouse (now one of the coaches of Hurricane’s Flying Tigers mountain bike team) with being the inspiration for his IRONMAN quest.

“In 2009, Andrea was invited to run the St. George Marathon with a friend,” Arthur says. “Before that she’d never even done a 5K; she just wasn’t a serious runner. But I saw the effort she put into that, and she really inspired me. By that time she’d had six kids, and I remember thinking ‘man, if she can do that, what’s my problem?’ So that started the journey for me.”

However, Arthur would be plagued by lower back issues; specifically, a ruptured lumbar disc that still troubles him to this day. “For several years, any kind of physical activity was difficult for me,” he notes. While struggling to make it through his workouts, Arthur was recruited to provide breakfast concessions for the inaugural edition of IRONMAN in St. George. It was his first exposure to the world of endurance triathlon. And he was hooked instantly.

Says Arthur, “We were out at the 2010 swim start, and it was the coolest thing I’d ever seen. It was so exciting, looking into the eyes of the athletes, and trying to imagine the sacrifices they’d made to be there. I tried to visualize the journey they’d be on that day, and it was so inspiring, so awesome.”

Still, Arthur never thought of himself as “that guy” who could become an IRONMAN. While dealing with his back issues, he continued to volunteer at the event for the next several years. Then in 2012, he learned that the IRONMAN organization planned to present a 70.3 version of the triathlon, half the distance of an IRONMAN.

“I thought ‘shoot, a commoner like me should be able to do that,’” Arthur laughs. “By then, I’d completed the St. George Marathon once, and had done a few half marathons. But I didn’t have a road bike, a wetsuit, or goggles. So, I definitely had some work to do to get ready for that race.”

With Andrea’s approval, Arthur took the couple’s tax returns and bought what he calls “the cheapest road bike I could find,” and procured a used wetsuit on eBay. Then his training began in earnest – although prowess in all three sports was not immediately forthcoming.

“I remembered myself swimming as a 12-year-old, but in my 39-year-old body, it just wasn’t the same,” Arthur admits. “I was coughing, sputtering, having dark thoughts about drowning. Running, too, should be pretty elemental. But I challenge someone to run after riding your bike for three hours! It all sort of came crashing down on me; how difficult it would be to do even the 70.3 distance.”

Fortunately, Arthur found a way to muscle through his worries, and get himself into competitive shape. Signing up for the 2013 IRONMAN 70.3, he felt well-trained and able to take on whatever the course had to offer – that is, until he began the run.

“I felt as horrible as I’ve ever felt,” he confides. “That was my lowest low; I was hating myself, and hating the whole world, because I felt so bad, and was questioning why I’d actually paid money to put myself through that. Fast-forward an hour later, I was crossing the finish line and already thinking about signing up for next year!”

He did register for the next year’s IRONMAN 70.3 in St. George – and the next year’s, and the next year’s, and every IRONMAN contest of that distance held here ever since. “I like to be the local who always shows up for the local races,” Arthur says. So, when the announcement came that the World Championships would not be held in Kona, but would be staged here for the first time ever, Arthur felt obligated to show up for that one as well – despite the fact that all three triathlon distances would be double what he’d conquered in the past.

Again, with Andrea’s and the children’s blessings, Arthur committed himself to the training regimen needed to bring him to the starting line at Sand Hollow Reservoir on May 7. And despite the severe intestinal distress, more aches and pains than he could have imagined, and fears that he’d never go the distance, he did, in fact, hear the six words that every competitor covets: “Arthur LeBaron, YOU are an IRONMAN!”

Along the way, Arthur says he learned vital lessons, which he hopes to keep top-of-mind as he accepts the invitation to compete in this fall’s IRONMAN 70.3 World Championship in St. George.

“I realized I can do a lot more than I thought I could. Whoever imagines that they can swim 2.4 miles; that seems like infinity! And then riding 112 miles, and then running a marathon … most people will never be able to wrap their mental arms around doing all of that in one day.

“I’ve learned that a triathlon is actually four disciplines: swimming, biking, running, and determination,” Arthur finishes. “It’s really been a fun journey; I’m so grateful that IRONMAN is here in our area.”