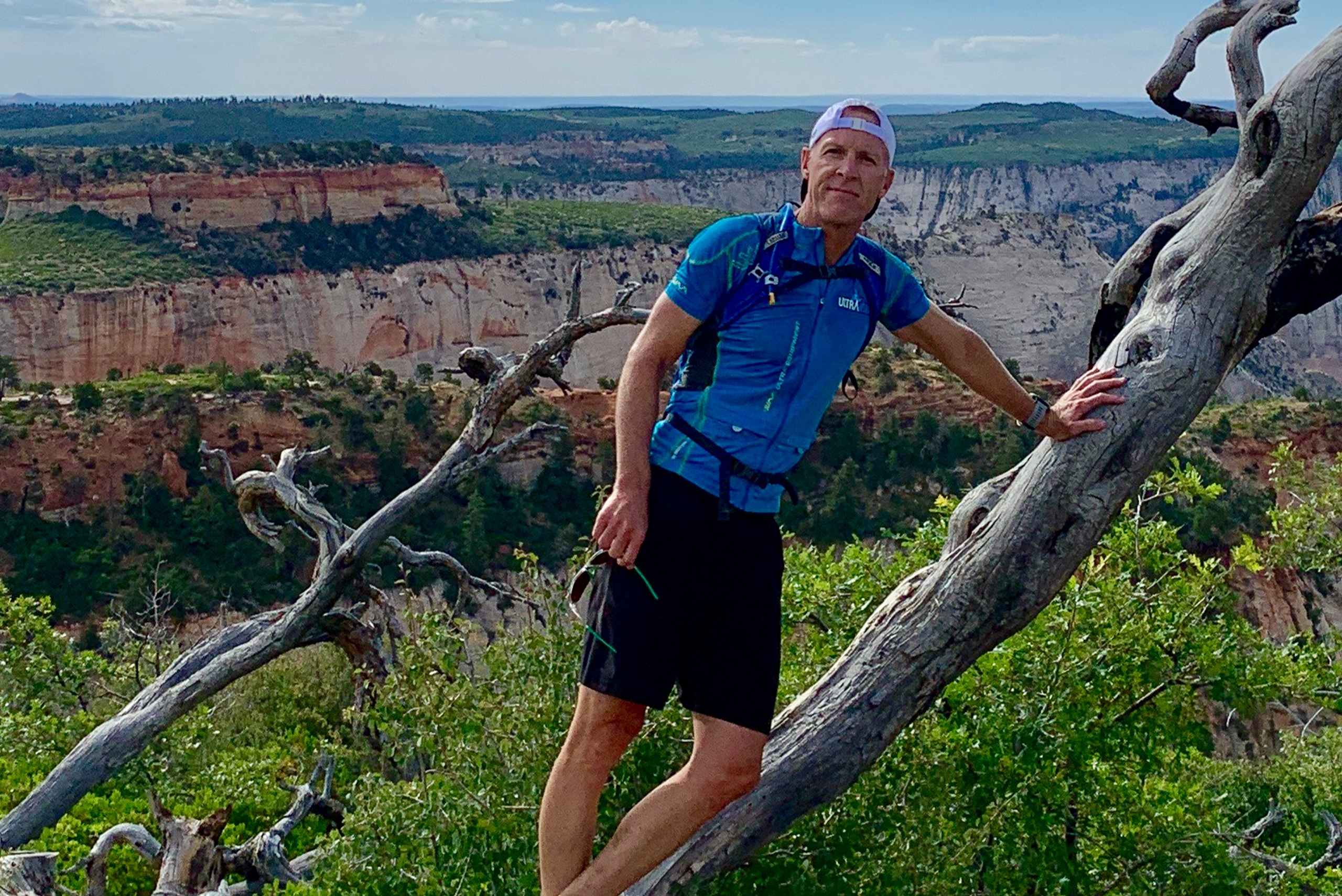 For Dr. Scott Parkinson, racing in front of his hometown crowd on May 7 in the 2021 Intermountain Healthcare IRONMAN World Championship presented by the Utah Sports Commission is an incredible honor. Dr. Parkinson, who practices internal medicine in St. George, has completed 17 IRONMAN races since starting to compete in 2011. He’s raced in IRONMAN competitions in Houston, Cozumel, Sweden and New Zealand, but the St. George course is still his favorite.

“It’s definitely challenging, but St. George probably offers the most visually stunning scenery that I’ve seen anywhere,” said Dr. Parkinson. “Each race has its memorable moments. In Sweden, the crowds were amazing, during the Cozumel race we had a huge rainstorm which saved us from the heat and we ended up running through two inches of water, and New Zealand was a blast all around. The World Championship course is the toughest I’ve trained for, but the challenge coupled with the beautiful scenery and hometown crowd cheering me on is going to make the May race an incredible experience.”

Dr. Parkinson, 53, went to medical school at Western University of Health Sciences in Pomona, California and then moved to Philadelphia for his intern program, followed by his resident program in Tampa before opening up a private practice in Jacksonville, Florida. Then, 17 years ago, he decided to move back west. When asked why he selected St. George as his home, the answer was quick and easy, “Palm trees! After living in California and Florida, I decided I couldn’t live without palm trees. And, St. George has such a beautiful backdrop with palm trees, red rock and stunning mountains.” He had another offer in a larger desert city, but chose St. George due to the small town feel with all of the great amenities, as well as sunshine almost all year long.

The Greater Zion region provides Dr. Parkinson not only with the perfect place to call home, but the best location to train for triathlons. He loves that he can ride from his house to Zion National Park for a longer training ride or do a quick 20-minute roundtrip ride into Snow Canyon State Park. And, he noted that the selection of scenic trails for training runs are endless out his backdoor.

As for the swim, Dr. Parkinson noted that this part of the race used to be his biggest challenge but now is his favorite. “In 2010, I participated in my first sprint triathlon and thought I was going to drown doing 10 laps in the pool – it made me really nervous,” said Dr. Parkinson. “Then, in 2011, I competed in my first IRONMAN in St. George and there were big winds, I was worried about the swim. I started as a runner and became a swimmer only 11 years ago. It was my limiting factor in triathlons. Sometimes it felt like two strokes forward, two strokes back.”

Dr. Parkinson turned this challenge into an opportunity and now views the swim portion of the race as his favorite. He mentioned that he likes how fresh he feels at the start of the swim, the feeling of getting in the water to race when you still have so much energy. “I really enjoy the swim now, I’m not as nervous as I used to be,” he added.

His ability to overcome the initial challenges of the swim is a metaphor for how triathlons have become an important therapeutic tool for Dr. Parkinson. Over the last 11 years, he’s trained with two friends and during their devoted time of exercise, they also have been able to be their own therapists and counselors. The comradery and friendship forged while training has helped each of them work through issues that impact their jobs, marriage, faith, kids and more.

“Triathlon training, for me, has been therapeutic both mentally and physically when able to work out with someone else,” added Dr. Parkinson. “These two friends will be lifelong friends now. We have supported each other through all struggles of life and enjoy competing with each other at the events.”

These training moments also keep him motivated. Dr. Parkinson has been thinking about “motivation” a lot lately as he prepares to race in IRONMAN’s ultimate competition. “Motivation changes from year to year,” he added. “Initially, I was motivated to just finish and see what I could do in each race. Now, it’s more about racing for those who cannot. As an example, my wife was a big runner, but can no longer enjoy the sport. I do this for her, she’s my biggest cheerleader. I have plenty of patients and friends who have been active and suddenly aren’t. As we age, I see how it impacts our bodies. I race, in part, for those who no longer can.”

Dr. Parkinson’s patients, friends and family will be cheering him on during the May 7 race. He’s excited to race in front of his hometown crowd but he also is excited to be on the same course as the best athletes in his sport. He watched the IRONMAN 70.3 World Championship in September 2021 and was in awe of how fast the pros competed. “I’m super excited to be there with the top pros and top age groupers in the world,” said Dr. Parkinson. “I always look at my time when I finish, but it will be even more exciting to see how I stack up compared to the best in the world on this course.”

In the end, Dr. Parkinson sees it as a competition against himself. He loves the spirit of competition. “I know I’m not the fastest or the slowest, but I love it,” he concluded.

Dr. Parkinson will kick off his World Championship race on May 7 at 7:20 a.m. at Sand Hollow Reservoir for the start of the swim in the men’s 50-54 age group.